Remembering Pearl Harbor, Forgetting Chaplin, and the Case of the Disappearing Western Woman: A Picture Story by Miriam Silverberg

The only reason why I move so slow through Miriam Silverberg’s Erotic Grotesque Nonsense - The Mass Culture of Japanese Modern Times is the book’s singular flaw (solely in terms of affecting my reading speed, that is) which is also its greatest asset: the endnotes. Virtually every paragraph will turn you to the back of the book. And things are not any different with her articles or essays: in Remembering Pearl Harbor, Forgetting Chaplin, and the Case of the Disappearing Western Woman: A Picture Story more than 10 pages out of a 53-page commentary are endnotes. 53 is also the exact number of endnotes in Erotic Grotesque Nonsense. In hindsight, it doesn’t seem that big of a number. And content-wise, the book will indeed press you — no, actually engage you — to turn to the back for an exciting read of extracts, references and added insight concerning the plethora of ideas that Silverberg blends into her argument with sheer refinement and analytical prowess. Like the true intellectual that she was (she passed away in 2008) and still is through the enduring exceptionality of the work she left behind, Silverberg prods the reader to extend his or her knowledge beyond the confines of the main narrative. The endnotes encouraged or rather strengthened my already-obsessional impulse to investigate a surplus of primary and secondary material covering Silverberg’s main topic — and that was a good thing.

This post is not about her book, but about the essay I introduced above. Remembering Pearl Harbor… is part of a series of debates on a subject that preoccupied much of Silverberg’s illustrious career: Japan and the modern or the “modan," which was the term used during the Taishō and early Showa period. This is a polymorphous concept of considerable historical and sociological weight and it is more carefully scrutinized in her masterpiece Erotic Grotesque Nonsense. In this book, Silverberg returns with added emphasis to demonstrate how the constantly-shifting modan permeated every aspect of all subjects of Imperial Japan. As such, the article that I’m about to examine functions as a good introduction to her oeuvre and I recommend everyone to read it before heading into her lengthier works. In the following paragraphs I want to summarize the main theoretical constructs employed by Silverberg in her investigation of modernity, consumer habits and, above all, the contradictory notion of identity at a time when Japan found itself at the height of its colonizing power.

To start with, here, just like in her book, Silverberg uses a specific definition of the main concepts of modernity and identity. She uses the term "modan" in order to underscore the specificity of the associated Japanese history, and to distinguish this term from the wide-ranging philosophical, literary, and historical English-language literature on the variants “modern,” “modernist,” and “modernization…” She then alludes to a number of historical and literary anecdotes to reinforce her argument that modernity and identity are interrelated and in constant flux, despite or in spite of the presence of a coercive nation-state apparatus that sought to homogenize and change the mores of the population, both at home and in the new colonies.

The first anecdote involves the 1937 meeting between Yamaguchi Yoshiko (later known as the Hollywood starlet “Shirley Yamaguchi”  who married sculptor Isamu Noguchi, served for 18 years as a Diet member for LDP and, at the present time, she is still a popular TV personality in Japan) and Kawashima Yoshiko, “the Mata Hari of the Orient,” cousin of the puppet emperor Pu Yi and famous spy, eventually captured and executed by the Kuomintang. When these two meet, in a funny exchange that reveals the complex interplay between two shifting identities, Kawashima, who is the eldest and dressed like a boy, is surprised to find out that Yamaguchi, who is dressed in Chinese garb to fit with her idol persona of Ri Ko-ran, is actually Japanese:

“Oh, so you were really Japanese!” The Manchurian woman, doubly cross-dressing as a Japanese male, then turned to the younger Japanese woman, who was dressed as a Chinese female. Addressing herself in masculine, familiar terms as “Boku,” this woman, then over thirty, flirtatiously asked Yoshiko to “call me big brother!”

In this fateful encounter, Silverberg discovers a new dimension, one reminiscent of a Platonic event. Gender identity, supposedly of a fixed nature in a traditionalist setting, is put into question or, in Silverberg’s words, is “up for grabs.” As a spy in the service of an empire which simultaneously boasts misguided pan-asiatic ambitions on the international stage and reactionary policies at home, Kawashima Yoshiko is assumed to follow conservative values among which a clear division between male and female genders is absolutely indisputable, if not inviolable. Instead, she clearly identities herself as a male, not only by dressing as a boy but also by using specific language signifiers that only boys use. Although she does not engage in the sort of conservative discourse mentioned above, Kawashima is still a national hero. The notion of identity is complicated even further by Yamaguchi Yoshiko’s nationality as a Japanese national who, “like the state of Manshu” (two years earlier), “was made by the hands of the Japanese.” Yamaguchi becomes the Chinese idol Ri Ko-ran (or Li Hsiang-lan) and is accepted as such to the degree that her actual Japanese nationality is cast into oblivion (as shown earlier by Kawashima’s confusion). This circumstance enforces Silverberg’s original position that Japanese identity is never static but constantly fluctuating and self-defining, notwithstanding the many racist declarations by various politicians (past and present) who try to paint it as one homogenous, unchanging totality.
This notion of “identity-in-flux” cannot be separated from the consumption of images within a culture of modernity which was most prominent during the time of Japanese colonialism. In this setting, the consumers of images also built their own individual identities through the availability of choices that the interwar age of mass-consumerism offered in the form of “photographs and advertisements in the mass press, in posters, in movie programs, and in the movies during the 1920s and 1930s.” As Silverberg demonstrates by using Ozaki Midori’s short story from March 1929 issue of Nyonin geijutsu the protagonists’ fantasies about Valentino and Charlie Chaplin contain mechanisms for identity formation, independent of what the government prescribed or popular consumption demanded (even though they cannot escape the scope and background of these two entities/institutions).

Because she’s dealing with a Japan in the midst of empire-expansion and colonization, Silverberg diverges from the main narrative to offer some painstaking references to objectifying attitudes towards Koreans, the most noteworthy ones involving the image of Korean people — especially that of cafe waitresses (jokyū) who can be considered “a chilling harbinger of the ianfu  [or comfort women] history” — in Moro Genzo’s 99-volume series Shin Chosen Fudoki published in 1930. In this chronicle, counterfeit reasons for the annexation of Korea into Japan abound, such as the claim that Korea lacks folk culture (minshu bunka). But most surprising are the frequent declarations of admiration for the simplicity and preservation of Korean traditions, in contrast to the aggressive modernism of mainland Japan, which has managed to supplant traditionalism in favor of an infatuation with European and American culture. These feeble attempts at national identity-formation by casting the colonizer as the colonized were furthermore complicated by the country’s entrance into WWII and by the modern citizens who, like all consumer-subjects of their time, were beset by a multiplicity of images that created confusion and contradictions.

Elsewhere I mentioned that Silverberg uses Charlie Chaplin’s 1932 visit to Japan as an effective hook to lead people into the bedazzling universe of Taishō mass-culture. In this article too, Silverberg mentions Charlie Chaplin’s visit but focuses on the effects of mass production and consumption that it elicited. We find out, for example, that Chaplin’s visit was an overwhelmingly marketable media event: anything from hard-boiled eggs and tempura to chocolate, straw hats, fountain pens, poems and even the spirit of the Japanese army — all of this was advertised in the mass media with the accompaniment of Chaplin’s famous “Little Tramp” persona. His glorious reception at all levels in the capitalist interchange between consumer and producer stood proof that “Chaplin’s appeal crossed class boundaries in modan Japan.”

The cultural articulations of the Japanese consumer-subjects constantly juxtaposed distinct ideas and entities in such sites as magazine layouts, theater costumes, and language, because culture was seen as fragmented in time and space. [Code-switching is] the active and often sophisticated process of moving between pieces chosen from various cultures within and outside Japan…

During the WWII, this type of images largely disappeared from the mass media due to government censorship. However, as Silverberg points out in the last paragraph of the article, shades of Charlie Chaplin’s Modern Times still had an impact on some Japanese movies, like in the scene of a sushi-machine running out of control. And when she asked a film archivist how he felt once images of Buster Keaton and Charlie Chaplin disappeared from public view, his response was: “It was lonely.” 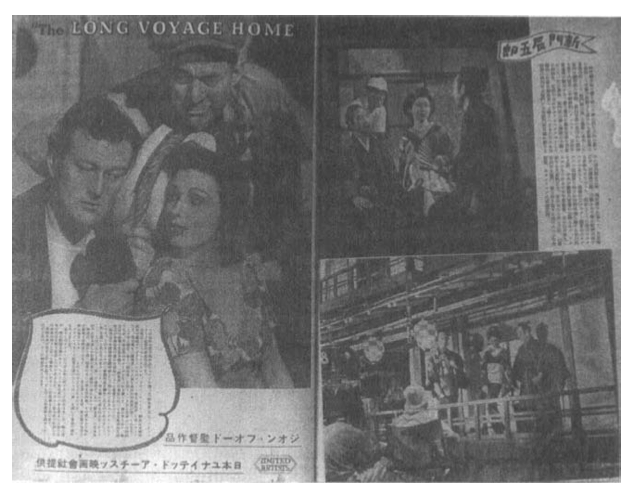 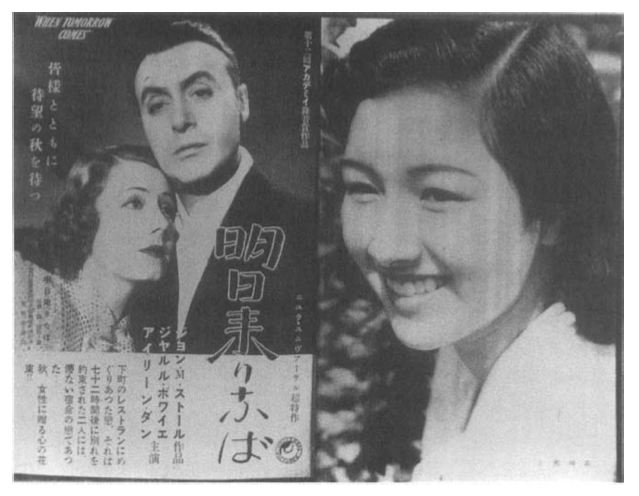 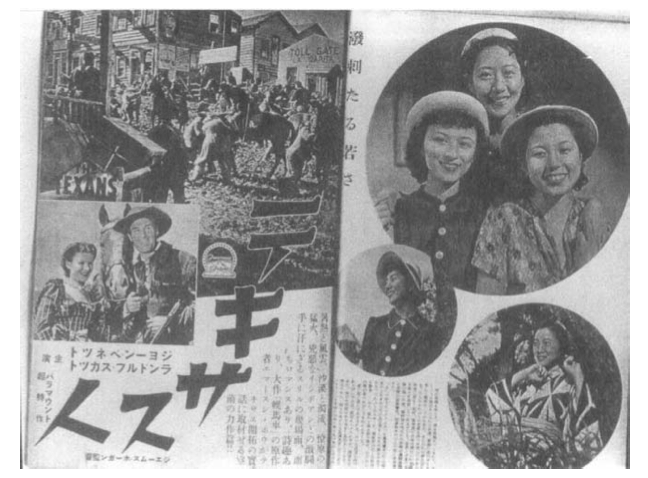 Posted by Collin Rusneac at 7:28 PM