Beyond Sakoku: The Korean Envoy to Edo and the 1719 Diary of Shin Yu-han by James B. Lewis & Carnival of the Aliens - Korean Embassies in Edo-Period Art and Popular Culture by Ronald P. Toby 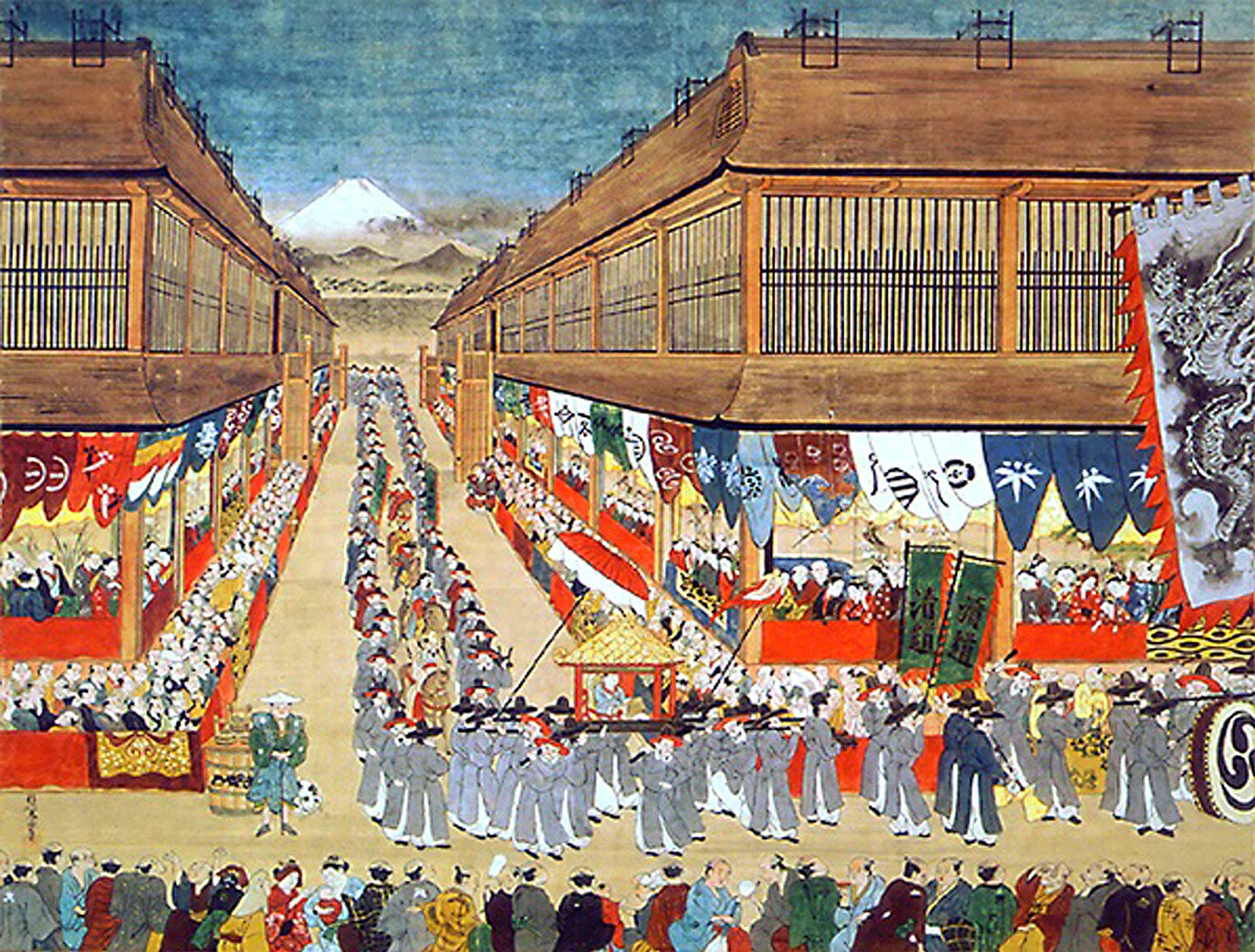 I picked up a few significant items from reading James B. Lewis’ article Beyond Sakoku: The Korean Envoy to Edo and the 1719 Diary of Shin Yu-han:

The highlight of James B. Lewis’ article is the Appendix or A Translation of a Selection from Shin Yu-han’s Haeyurok: The Entry into Edo, and Comments on the Shōgun and his Retainers. This part is well worth reading as it offers rare first-hand insights into eighteenth century Japan. Shin Yu-han (or Sin Yuhan whom I’ve mentioned briefly when I talked about Jeong-Mi Lee’s article) took part in the 1719 diplomatic mission to Japan. He kept a diary entitled the Haeyurok in which he recorded in astute, critical and sometimes funny deftness all that he saw and experienced in his long travels throughout Japan. There is mundane stuff about official attire, banquets, and rigid schedule that had to be followed to an annoying precision. The most remarkable passages are his descriptions of meeting Yoshimune (the eight shogun, 1684-1751) and his interpretive take on Japanese hierarchical, hereditary system of leadership. I would like to render below some of the most informative and exciting excerpts from Shin Yu-han’s diary. The translation was done by James B. Lewis and I reproduce it as it appears in the original:

Yoshimune’s character is dauntless, superior and wise, and this year, he is thirty-five years old. He is of strudy spirit and his (sic) a diginified bearing. He is a lover of the martial arts but finds no joy in literature. He respects economy and rejects extravagance. Ordinarily he says, “Japanese think highly of Korean letters. But the style is unique for each. Although we study it, since we cannot become skillful, for us, it is best to write in Japanese. When the Korean ambassador comes to Japan, there are ceremonies to display our military might and to provide music, but these have no meaning, either. The military is the way to defend ourselves, but if they see it and it scares them, we lose the meaning of our desire for contact, or if they despise it we have not achieved out (sic) scheme of displaying force. When it comes to musical skills, we have our mutual customs. Why should foreign music gladden the ear; what is the purpose of this ceremony? In the way of friendly relations, value lies in sincerity. They are men from a faraway land, do not delay them. We must see them home pleased. We shall pare away and remove all extreme rhetorical flourishes and details,” and so forth.  When practicing governance, he puts honesty and humility first. He aids the poor and reduces their taxes. Those who commit capital crimes have their noses severed instead of being executed. All sing his praises.

When one of his minsters entered his presence dressed in brocades, Yoshimune immediately asked him the cost of the gown, and said, “Even the cotton robe I have on is sufficient to cover the body.” Thereafter it is said that not one of his ministers wore brocades.

…the Hayashi house has presided over letters in Japan. Generally speaking, all those who practice literature with the state as their patron, come from this house. Those who have been recommended as students and draw a salary are several tens of people. However, when viewed, the (product) is clumsy and simple and does not succeed (in having) a style. Since all Japanese offices are hereditary, even if there is a scholar of high caliber and profound learning, without studying under Nobuatsu [Hayashi], he will not find a position. The situation is laughable.

The rules which were brought at daybreak, were not only written in Japanese kana, but were also written in grass writing and not at all clear. According to the magistrate, Amenomori Akira was bed-ridden with illness and there was no one who could interpret the document, no one who could translate it into Chinese. The envoys said that with unclear rules of protocol, they could not present the communication. They dispatched a fast messenger to summon Matsuura Tadashi, but he said it would be difficult to write it on the spur of the moment and declined. Japanese literature is, in the main, written carelessly, is blurred, muddled, and unskillfully copied. Accordingly, everyone expressed disapproval.

Before I move on to the next article, I would like to point out that James B. Lewis wrote a book entitled Frontier Contact Between Choson Korea and Tokugawa Japan which, from what I can tell, has a richness of complementary information regarding the same subject matter described above, complete with demographic statistics, pictures and other interesting details related to the Korean envoys to Japan in the early modern era. That book is in my possession and I hope to read it one day, if not in its entirety, then at least a couple of chapters that could add some new information to the topic of early Korean-Japanese contact.

The second article that I want to talk about is Ronald P. Toby’s Carnival of the Aliens - Korean Embassies in Edo-Period Art and Popular Culture. Complementing the topic of Korean ambassadorial visits to Japan, this compelling essay contains, to a large extent, meticulous art criticism in reference to the many pictorial representations of Korean processions. Toby looks at the historical origins of these paintings but, mainly, he details the color composition and visual arrangement of elements contained in them, which are of interest not only to the art scholar but also function as clues to the assortment of commendatory attitudes toward Korean envoys prevalent among the Japanese people. Among the detailed exploration of such artistic products is Hanegawa Tōei’s Chōsenjin raichō zu which I have attached at the beginning of this review. This and other similar artistic depictions and representations of Edo-period Korean envoys (in the form of ema, byōbu-e, and emaki) were a successful source for financial investment and national trade. As Toby mentions,

The depiction of embassies, particularly Korean ones, by the turn of the eighteenth century had become a major thematic genre in every medium of Japanese art. Not only did courtiers, the bakufu, and daimyo commission paintings to record the embassies, but artists and print shops churned out dozens of versions of prints and pamphlets with Korean embassies as their subjects, suggesting an eager and ready market.

However, for me, the most interesting item in Toby’s essay is his exploration of Tōjin gyōretsu (foreign parades) in which participants put together Chōsen yama (Korean floats) and paraded in the streets masquerading as Korean envoys. The earliest recorded incidence of this kind of matsuri (festival) took place in 1647. For this historical occasion hundreds of participants adorned Korean attire and their floats sported

Nishijin silks, already the finest in all Japan [and] were decorated lavishly with dragons and phoenixes, lions and unicorns, all embroidered and appliquéd in gold thread.

The most astounding aspect of these festivals was the ability of the common folk to gain the viewership of the shogun himself, something that not even samurai of higher social rank could obtain easily. As a result, members of the lower class were given the rare opportunity to escape the rigid strictures of Edo-period social division and to assert equality and even moral superiority over members of higher status. In the Meiji period, these festivals were discontinued because they were seen as remnants and reminders of the Tokugawa Shogunate and its link to a past where peasants could step outside their social class. 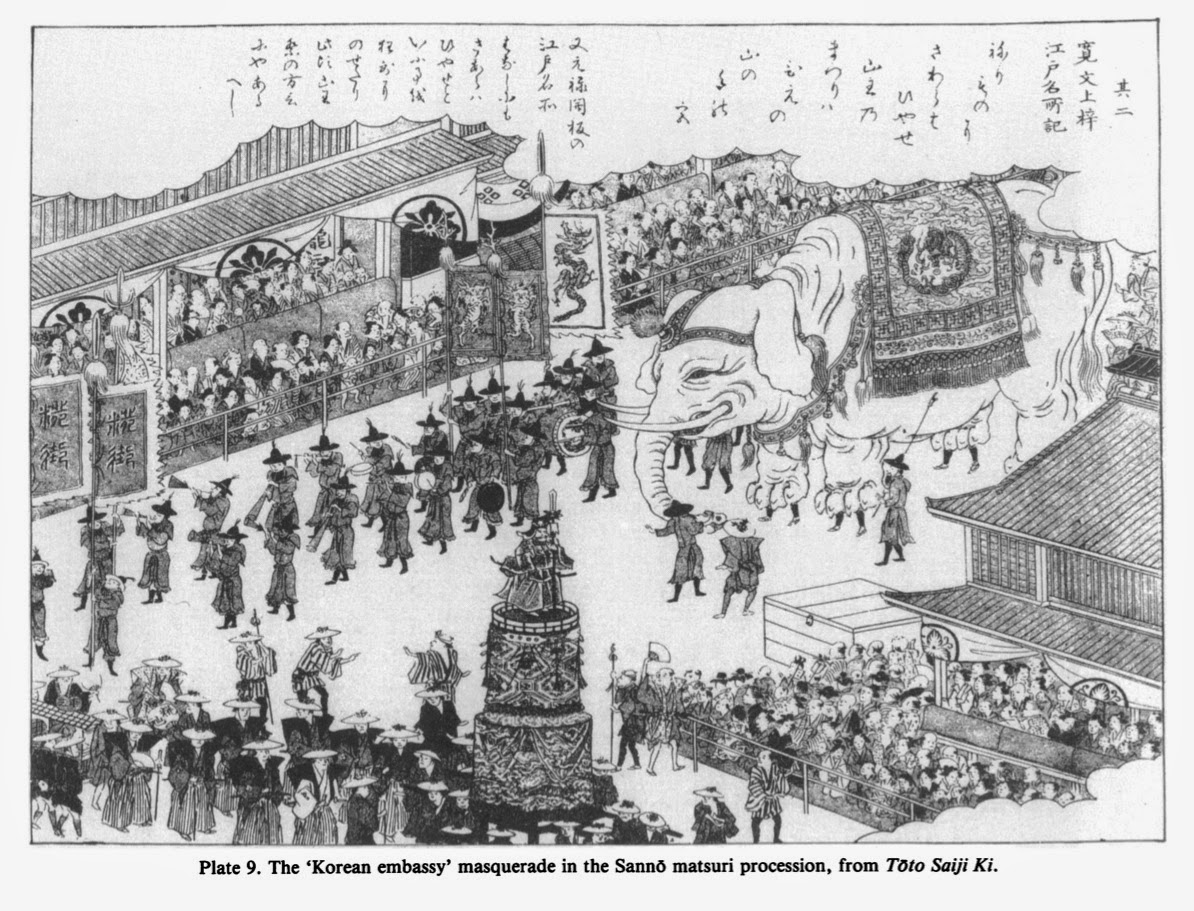 The historical importance of Korean culture on the effects and development of Japanese identity (with all the complexities this notion has to offer) cannot be underestimated or forgotten (as various Japanese revisionist scholars of extreme nationalistic persuasion have been attempting to do for some time). The last lines of Toby’s article resonate strongly with me:

Works cited in this article:

The pictures used here all come from Toby's article.
Posted by Collin Rusneac at 12:27 PM