Wayne C. McWilliams’ article East Meets East - The Soejima Mission to China, 1873 takes a close look at the personality of Japanese Foreign Minister Soejima Taneomi (1828-1905) during the high point of his career, which was the 1873 trip to China where he managed to secure an audience with the emperor, an almost-impossible accomplishment at the time. The author also makes the strong argument that the real significant outcome of Soejima’s trip planted the seeds of Japanese expansionism. Under the disguise of necessitating a diplomatic interchange with the Chinese government on matters regarding Formosa (as Taiwan was known back then) and Korea, the new Ambassador Extraordinary and Minister Plenipotentiary ordained by the fledgling Meiji government sought to

…lay the diplomatic groundwork for an ambitious program of Japanese expansion in Asia. This program included the assertion of the Japanese claim to the Ryukyu Islands, the conquest of Korea, and the sending of a military expedition to Formosa with the design of annexing a part, if not the whole, of that island.

The official reason behind the mission to China as given by the Japanese government ostensibly included an incident in which a group of shipwrecked Ryukyu islanders were massacred by the aboriginal tribesmen of southern Formosa. In addition, the tensional relations with Korea who wouldn’t recognize the legitimacy of the newly-installed Meiji Emperor at the helm of the country’s leadership was taken as an affront by the Japanese statesmen, many of whom called for punitive armed conflict.

As I showed in a previous post, the Koreans had enjoyed positive relations with the Tokugawa regime. Significant cultural and trading exchanges between Japan and Korea took place from the early 1600s until 1811 (in this interval, Korea sent twelve diplomatic missions to Japan but there were no missions in the reverse direction). When the bakufu government fell in the aftermath of the Meiji revolution, the Korean government refused to officially admit the legitimacy of the new Emperor as the head of state not only because they had lost their Tokugawa allies but also because, at the time, it was regarded that only the Chinese Emperor had the unique distinction of even being allowed to use the title of ‘Emperor’. This was a prevalent view coming from China across most Asian nations who, along with Korea, were paying tributaries to China in exchange for military defense, political recognition and a certain degree of autonomy. McWilliams argues that Soejima “made it his purpose to render preposterous China’s long-held posture of world supremacy and to undermine or eliminate the vestiges of Chinese condescension toward his own country.” It is noteworthy to mention here that the Tokugawa regime also rejected the Chinese-centered order and refused to pay tribute to China, a point that was specially emphasized during the Korean missions to Edo. Andrew Gordon reminds us that during their ambassadorial visits,

The Koreans were treated with a certain respect. They were not expected to prostrate themselves or to convey symbolic servitude, as they were in visits to the Chinese court. They interacted more or less as equals…

Despite their close historical bond, by the time the Meiji Restoration took off, relations between Japan and Korea soured. Meiji statesmen, encouraged by their advances in science and military which came with the opening of Japan to the West, became more hawkish and confident that the superiority of their forces would prevail in an open conflict against Korea — a conflict which was seen as inevitable due to Korea’s continued refusal to establish treaty relations and the affront brought against the Meiji Emperor. They sought to prove this by engaging in a course of action that strived to clarify Japan’s national boundaries and to counterbalance the regional influence of Western countries which imposed on Japan strict, disadvantageous treaties. This course of action was brought to a favorable conclusion by Soejima. His reception by the Chinese Emperor before all other world delegates in 1873, the falsely implied, unwritten consent by the Chinese that Japan can invade and occupy Formosa, the skillful political manipulation which saw the removal of Chinese involvement from Korean foreign policy — these were but a few successes that propelled Soejima to a position of historical eminence. In the author’s own words, Soejima’s political adroitness

…set the tone for future Japanese relations with China, and like the Iwakura mission that visited the major capitals in the West, his embassy effectively proclaimed to the rest of the world, both East and West, that Japan was ready and able to take its place as a proud and independent member of the community of nations. In joining — indeed, in leading — the representatives of the Western powers in the successful quest for an audience with the Chinese Emperor, Soejima was in effect declaring Japan’s new identity; no longer was Japan to be identified together with China as a tradition-bound, exclusive and isolationist Asian country beyond the pale of modern international intercourse. Instead, Japan would line up with the nations of the modern West and challenge its reluctant Asian neighbors to abandon the closed world of the past for brave new world.

Some significant points I learned from reading McWilliams’ article:

McWilliams takes a firm position on Soejima’s accomplishments over this last point. He addresses the ambassador’s success in the following way:

The failure of the Chinese government to make its position clear to the Japanese and to allow them to leave China without further questioning on these matters has generally been attributed to its ineptitude and lack of experience in diplomacy. But it may just as reasonably be argued that they were victimized by Soejima’s shrewd and deceptive diplomatic tactics. Soejima purposely obscured these important issues by placing pressure on the Chinese about the audience issue. The Korean and Formosan questions were dealt with in a covert manner so as to disguise their gravity.

Whatever the case may be, Soejima’s plan to see the Japanese Empire expand into Korea didn’t take fruition due to the seikanron dispute from October 1873, when members of the Meiji government voted against this course of action. The expedition into Formosa took place on April 1874 and this can be easily considered a victory for Soejima. The kokken gaikō policy, meaning the “defending, asserting and expanding the national sovereignty of Japan” took root and flourished under his leadership. His greatest accomplishment however was securing his position as the first representative of a foreign power to be received by the Chinese Emperor in almost eighty years, an event which had momentous implications for the future Empire of Japan and for Asia in general. 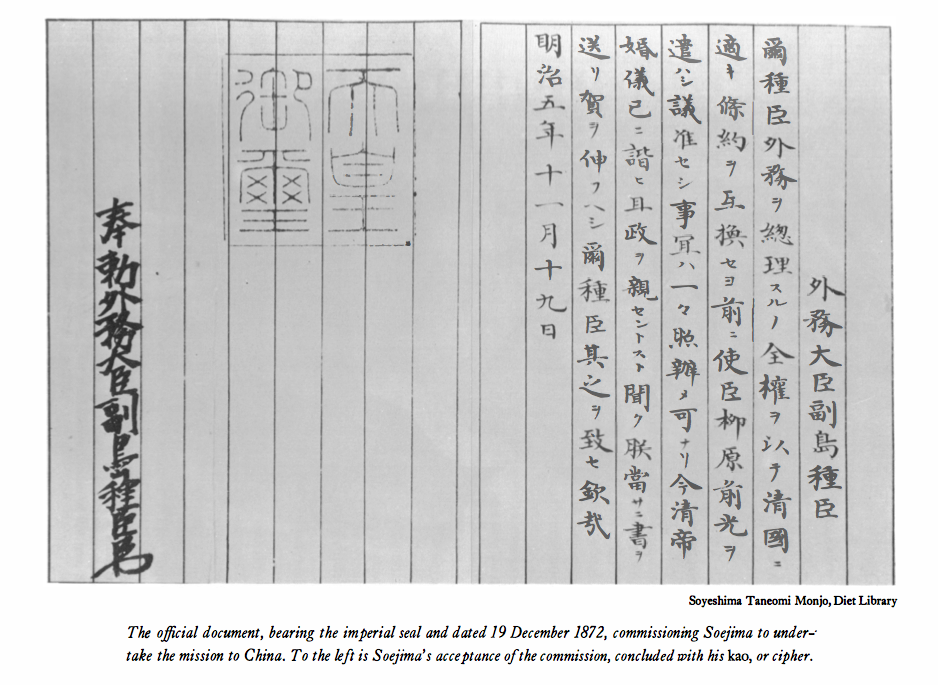 Pictures were taken from McWilliams' article.
Posted by Collin Rusneac at 12:52 PM